What is a Bankruptcy Proof of Claim?

Proof of claim is a document that is required to be filled by the creditor before getting paid in a bankruptcy case. Proof of claim instructions involve mention of type of claim and the amount owned by creditor so that the trustee can work out the amount to pay the creditor. This document also leverages the government support to close down without having to cause any more losses. 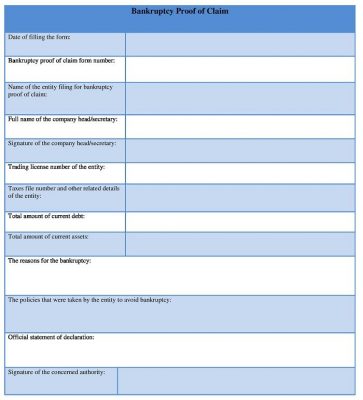 Download Easy to Edit Bankruptcy Proof of Claim Form at only $3.00

Bankruptcy Release Form
When a bankrupt is discharged from bankruptcy he or she is released from the legal obligation to repay debts that existed on the day that the bankruptcy was filed.