It is a document usually filed by an attorney for a creditor indicating that the attorney is representing the creditor in the bankruptcy case and that the attorney on behalf of his client would like to be served with copies of all documents that the debtor and other parties may be required to serve in the case. A notice of appearance usually contains language requesting service of papers and is a very standard and routine type of filling which is very common in all cases. In consumer cases, they are most often filed by secured creditors, especially mortgagees, who have a vested interest to follow the events in a bankruptcy proceeding. A creditor will often file bankruptcy appearance at the same time it files a motion or proof of claim. If you have a lawyer acting for you, it is your lawyer’s address that needs to be provided. The completed and signed original of the form is filed at the court. Below is a sample of Bankruptcy Appearance form.

Download online the sample format of Bankruptcy Appearance template in Word format. This template allows you to edit and customize according to your requirement. 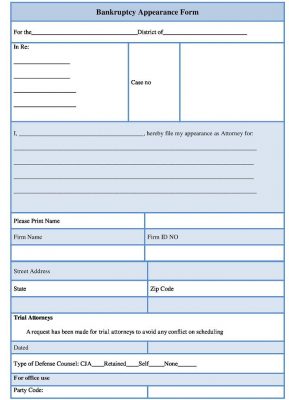 Download Easy to Edit Bankruptcy Appearance form at only $3.00