A notice of bankruptcy form is a demand for payments of money, at the request of a creditor. In other words, it is a formal notice of demand requiring a debtor to pay debt. This notice allows certain legal steps to be taken to ensure that the government steps in and allows the creditor to discuss the debtor’s future course of action. A fee is charged for applying for a notice of Bankruptcy and is payable at the time of making the application form. A creditor will need to give two copies of the bankruptcy notice to the court that is one to be filed with the court and one to be signed by a registrar or deputy registrar and returned to you so you can serve it on the debtor. Below is a sample template of Notice of bankruptcy form.

Use the printable notice of bankruptcy template available online. Download it either in MS Word or PDF format. Both MS Word and PDF format can be edited and customized as per your needs. 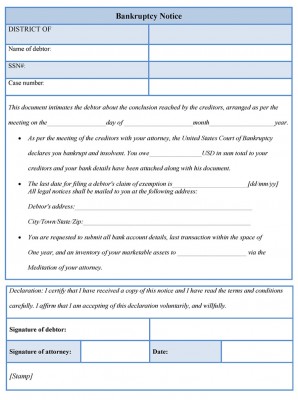 Download Easy to Edit Notice of Bankruptcy Form at only $3.00