The Bankruptcy discharge is used for releasing the debtor from any kind of personal liability for particular kinds of debts. This means that the debtor no longer is legally bound to pay his debts that have been discharged. The bankruptcy release form is a legal document from the court which prohibits the creditor of the debtor for exercising any action on him in order to collect the discharged debt. This bankruptcy discharge settlement claim form also prohibits the creditor from taking any legal action or establishing any communication for debtor because he is discharged from bankruptcy by the court.

Bankruptcy certificate of discharge form is a form that is filled by a person or a company to declare the discharge from court. There are variations in this form subjective to the forms that have been filled before.

Download sample Bankruptcy Discharge Form Template here in MS Word format. You can customize this form subjective to your requirement and print it for personalize usage. 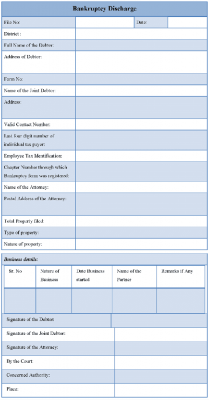 Download Easy to Edit Bankruptcy Discharge Form at only $3.00

Bankruptcy Release Form
When a bankrupt is discharged from bankruptcy he or she is released from the legal obligation to repay debts that existed on the day that the bankruptcy was filed.