When a bankrupt is discharged from bankruptcy he or she is released from the legal obligation to repay debts that existed on the day that the bankruptcy was filed. Bankruptcy release form states that the debtor’s liability is legitimately and permanently erased and that the debtor is no longer responsible for the debts. This form allows such an order which prevents the creditor to take action against the debtor. Bankruptcy release also takes place even if no payments have been made to your creditors, you are still making contributions under an income payments order or agreements or some of your assets have not yet been sold. The debtor is never personally liable for any of the debts that have been discharged till the time he is declared bankrupt. The form includes information regarding the different situations that both the debtor and creditor have to face during filing of the form. The form also specifies that the creditor cannot communicate with the debtor in any ways.

Download online the sample format of Bankruptcy release template in both MS Word and PDF format which allows you to edit and customize according to your requirement. 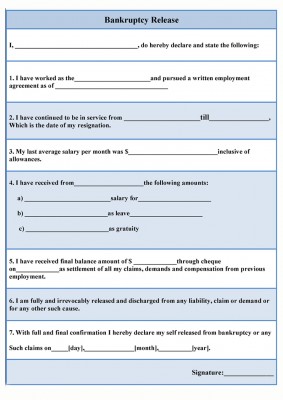 Download Easy to Edit Bankruptcy Release Form at only $3.00