Many companies would organize the employee of the month award to inspire the employee to give their best always. For which, an employee nomination form is required to judge who is the best as per the category. The format of the form includes all those essential issues that measure an employee’s credibility. The form maintains selection criteria and the employees are asked to answer on that basis.

A sample nomination form mentions the details of the employee, including his/her name, designation, performance on a project, achievements and skills. Qualification of that person is also needed to be mentioned in the form. The nomination can be for distributing certificate for the employee of the month award. The signature of the concern person is needed to make the data authorize. One must mention the date of submission of the form.

You can download the format of the form in both PDF and word file and customization is up to you as per your needs.

Employee of the Month Nomination Form 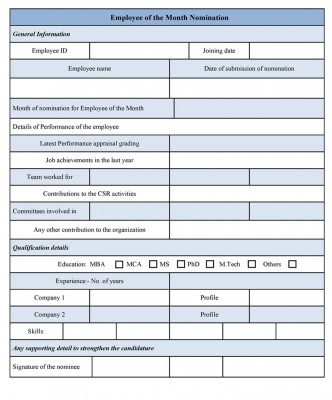 Download Easy to Edit Employee of the Month Nomination Form at only $3.00