An award nomination form, as the name suggests, is presented to review the information regarding the nominees to give an award. Generally the host company or an organization prepares this form in order to judge the deserving candidate for the award. The selection criteria are mentioned in the form and that should be filled up by the nominees along with the required details. This form is very common as it can be used for the employee award nomination form and even before getting the Nobel prize, such form is required to be filled up.

The form is available for the download in both PDF and Word file. You can customize the document as per your needs. 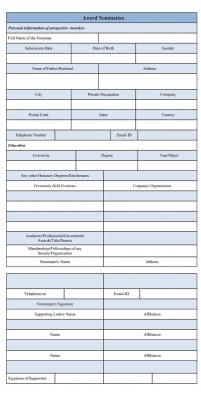 Download Easy to Edit Award Nomination Form at only $3.00