Student nomination form is very common in use in the educational field and as its name says it is used to nominate a student for giving him/her a special award, prize or anything. The form mentions the details of the concerned students in terms of the educational background. There are many criteria for the nomination and only the deserve candidate gets the chance. A student council can maintain such form to give the reward of a deserving candidate.

A nomination form sample contains the information regarding the student’s personal details, including the name of the student, father’s name, address and all. It also mentions the school information and the other segment is nomination detail that includes category and reason for nomination, certificate of school for the student and so on. The form is very useful to the board nomination as well as the award nomination firm.

You can download the sample of the form either in PDF or word format. The form is editable and you can customize it as per your needs. 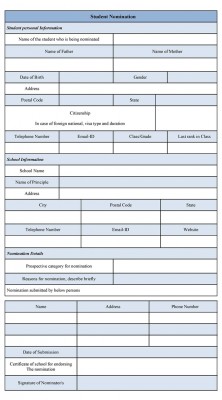 Download Easy to Edit Student Nomination Form at only $3.00