A builder lien release form is issued to protect a builder’s right to claim the payment after completing the work. It ensures legally that a builder should be paid as per the stated agreement. Once the payment is done, the builder also uses the lien release form template to make a form in order to releases all the right regarding the property. The form is very useful, especially in the field of real estate, mortgage, property and others too.

The form is needed where the payment related issues involve. The sample of such form contains information about the terms and conditions of an agreement and that should be signed by both parties. Apart from that, the payment related matters should be mentioned in the form. The form can be used by the subcontractor regarding a construction work as well as vehicle and mechanics fields.

A template of a builder lien release form is available in both PDF and word file. You can customize the document if needed. 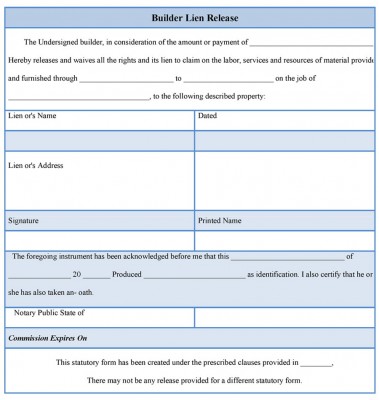 Download Easy to Edit Builder Lien Release Form at only $3.00