Be it print, electronic or digital, every mood practices this type of form to process the whole thing in a legal way and the form also gives the right to a producer to use the recordings or any kind of documents related to the film or an event freely. The content of the form carries information regarding the statement of release and along with that, it contains the personal details of the person who carries out the whole thing on behalf of an organization. You can follow the example here.

The template of the form is available in both PDF and word file. Make necessary changes as per your use. 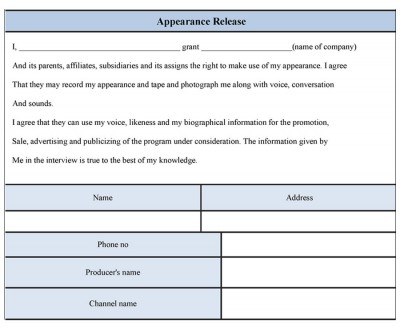 Download Easy to Edit Appearance Release Form at only $3.00