An advertising release form is made only for the commercial purpose that gives the right to the concerned authority of a company to release a person’s image, model or photography for the advertising purpose. The form is filled by the person who is responsible to promote a company by his appearance. The terms and condition should be mentioned clearly according the rules.

The sample of a standard form carries information regarding the statement of the agreement in which the concerned person gives the right to use his/her art for the commercial reason. Along with that, it contains the personal details of the person without missing anything. A model photography release form contains a declaration that should be signed by the model and in case the subject is under 18 years, a legal guardian can sign the form. For one’s photographic, you can follow a sample photographic release form. An example of the form is given below.

You can download the template of the form in both PDF and word file, according to your use. Make necessary changes if needed. 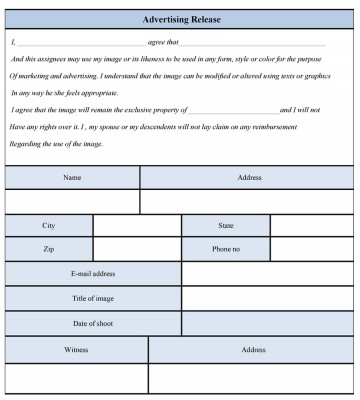 Download Easy to Edit Advertising Release Form at only $3.00