The template of the hospital discharge form contains the information regarding a patient’s personal details and the whole medical process, including what kind of treatment one has been undergone, the medicines and the number of the days in the hospital. This form also contains the signature of both the patient and the doctor under whom the treatment has been conducted. An example of this form is given below.

You can download the sample of this form in both PDF and word file. Customization is up to you. 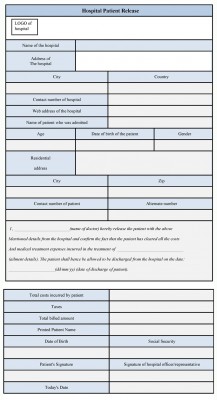 Download Easy to Edit Hospital Patient Release Form at only $3.00

X-Ray Report Form
An x-ray report form is presented after undergoing an x-ray process to analyze your inner body condition.

Medical Release Form
A medical release form is necessary in a medical emergency of a child when a parent is not with their kids.

Medical Authorization Form
A medical authorization form is produced when the parent or the guardian want to confer the authority to the medical practitioners or the health care providers to conduct their medical process on the concerned person in case of an emergency.

Emergency Medical Release Form
An emergency medical release form as its name depicts, this form is used in case of any emergency.